Drunkman Is Finished! And this Devlog shows me fixing the last few bugs, and building some kinda hype-animation for the run-up to release.

Not sure what to do about release yet. Should I try and organise some sort of premier/screening? Try and piggy-back on someone else’s film-festival or film-producers meetup? Try and start that artist’s screening and share-pooling meetup group I keep thinking I ought to start? Just upload it and press publish while hiding alone in my flat?

As yet, I dunno. Watch this space I guess. 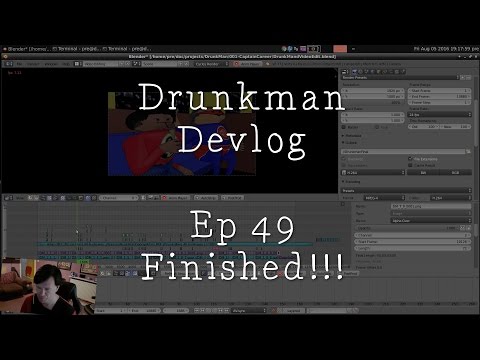 There will be one final dev-log posted to this channel once I know, then the 5 two-second hype films, then Drunkman Himself!

After that Devlog will be relegated to a different channel, to make it easier to subscribe to either devlog or only the toons. I won’t be doing more Drunkman though, and will be going back to doing Tentacles stuff. Probably in VR! It’ll be the Tentacles devlog I suppose, on the new Tentacles Devlog channel.

Before that there’s publishing Drunkman, and much writing to be done, so after Devlog#50 it might be a while.