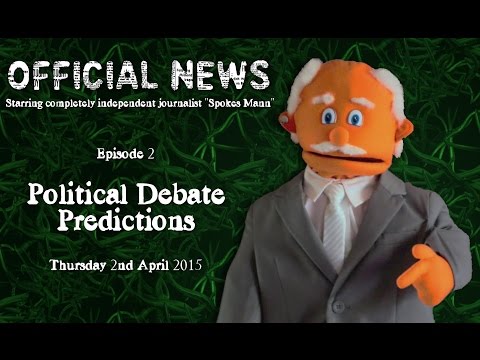 Good afternoon, I’m Spokes Mann and this is “Official News”, incorruptible reporting in no way influenced by the hidden tentacles of political power.

We can expect to see lively and vigorous debate within the strictly limited spectrum of opinions acceptable to the tentacles of power, and of course only casual dismissal of all opinions outside those strict borders.

Conservative leader, David Cameron will claim it is essential the country sticks with his Long Term Economic Plan that has seen the rich grow wildly richer with free quantitative-easing money while the masses suffer with wage collapse, welfare cuts and privatisation of essential services.

Labour leader Ed Milliband will agree with Cameron that the deficit must be cut, services must be slashed, and all without raising taxes.

Only also a mansion tax. And a bacon sandwich.

Liberal Democrat leader Nick Clegg will apologise for his last few years in government and plead that’d his hand was forced by the tentacles of power.

Then he’ll ask to be allowed to continue doing that.

UKIP clown Nigel Farage will accept that the country is going to hell, but place the blame on the poor and immigrants rather than on the tentacles of money and politics bleeding the country dry.

The tentacles have deemed this an acceptable answer.

Nicola Sturgeon from the SNP and Leanne Wood from Plaid Cymru will argue that their local tentacles should be in control rather than the national tentacles.

Meanwhile all will dismiss Natalie Bennett from the Greens as an economically illiterate hippy and will allow no in depth debate on the merits of wealth redistribution, a national income, monetary reform or effective controls on fracking or climate change.

Despite this seven-way debate, at the end of the election campaign either David Cameron or Ed Milliband will be prime minister.

This is NOT a damning indictment exposing the tentacle’s control over our democratic process and is certainly no cause for concern. Surely we can all agree that there is nobody at all in the country who could do a better job than one of these men. For, like me, they are independent human beings, not puppets controlled by tentacle monsters in any way at all.

That’s all that happened today, it wasn’t a distraction, and absolutely nothing else should concern you